Imports of foreign plastic could fall by as much as 80% next year, Catherine Early reports

Some are stockpiling it, some are sending it to landfill, some are finding other countries to take it. Scrap plastics, paper and other materials are piling up at scrapyards and ports after the surprise announcement by China to severely restrict imports of scrap as waste companies struggle to deal with the unprecedented situation.

The industry was unprepared for the Chinese government’s sudden announcement in July of a complete ban on imports of mixed, unsorted paper, and a restriction on the maximum weight of contaminated waste to 0.3% of the total contained in the shipment. The government said it needed to protect its environment from “dirty or even hazardous waste” sometimes found in shipments.

Following intense lobbying efforts from the waste industry, it has since relaxed these thresholds slightly and says it will accept contamination levels of 0.5% for paper and plastics, but nevertheless, the standards are so hard to meet that some have called it a de facto ban. Countries have until 15 December to make representations to the World Trade Organization (WTO), but China has already said that it will adopt the rules as of 31 December, with entry into force scheduled for 1 March 2018.

“There are approved levels of contamination allowed because they [the international recycling industry] understand that the technology available today can meet those standards,” she says.

The world is heavily dependent on sending its waste to China, which last year imported more than 36% of the world’s waste paper, and with the Hong Kong Special Administrative Region, more than 70% of the world’s waste plastics, according to UN Comtrade data. Trade in these commodities is worth US$17 billion and US$4.6 billion, respectively. European countries and the US are the main exporters.

Adler says that the announcement has already caused major changes in the global trade of scrap materials. Waste companies have been unwilling to risk continuing exports to China because if shipments are rejected they will be liable for return shipping costs.

Companies are uncertain of the detail of the new rules and customs officials have interpreted them inconsistently, she says. In one case, a member of ISRI had a shipment rejected because it did not meet the proposed rules even though it was compliant with existing ones, she reports.

Arnaud Brunet, director general of the Brussels-based Bureau of International Recycling (BIR), predicts exports of scrap paper to China will decline by 40% next year, and plastics by 80%. “The thresholds for impurities are not feasible, they are so low that it is a de-facto ban,” he says.

BIR wants the Chinese government to revise the thresholds. It is also calling for a transition period of up to five years, along with several countries, including the US, Canada, Australia, Korea and the EU. “If we don’t want the collapse of the market we need a transition period,” he says.

Adler agrees with the idea of a transition period. Besides, under World Trade Organisation (WTO) rules, any country changing regulations is required to allow a transition period, she says. Not only has China not proposed one, it has only given one month for consultation instead of the usual six, she says.

ISRI supports the Chinese government’s drive to reduce contaminated waste entering the country, Adler says, but adds: “This should not be at the expense of rejecting these high value commodities that are actually in high demand by their own manufacturing sector, which is the backbone of their industry.”

Prices of certain types of scrap in China have already risen alongside the slowdown in imports, she says.

In the EU, the commission has noted the Chinese government’s moves and says it is in touch with its authorities to clarify the exact timing and scope of the measures so that it can properly assess their impact. The commission backed China’s desire to protect its environment and was ready to cooperate with it to achieve this within WTO rules, a spokesperson said.

The commission wants all plastic packaging in the EU market to be recyclable by 2030, and is planning to publish a strategy in the new year. This will take into account international issues such as the Chinese import ban once details have been clarified, according to the spokesperson.

The circular economy strategy is unlikely to be finalised before the UK leaves the EU, but UK trade bodies are calling on the government to adopt the strategy despite Brexit, and apply new regulations on packaging design to help industries deal with China’s new rules.

However, environment secretary Michael Gove admitted in an evidence session in Parliament that he did not know what impact the Chinese import restrictions had for UK businesses, and had not given it “sufficient thought”.

Companies are already exploring other potential markets for recyclate with possibilities including Thailand, Vietnam, Cambodia and Malaysia and also India and Pakistan. “They have positioned themselves in the market but they certainly don’t have the same capacity as China,” says Brunet.

He adds that the regulations and legal systems on waste management in these countries are not as mature as they are in China, but that they could quickly catch up.

Analysts at PCI Wood Mackenzie believe that South East Asia could become a world leader in importing and processing plastic waste. In a report published in September, the analysts state: “This region has traditionally been the single largest source of [polyethylene terephthalate, or PET] waste imports into China and is now in the position to develop its reclamation capacity and secondary markets further.”

Phil Marshall, head of PET at the firm, said that some Chinese manufacturers were already considering moving their operations to other parts of Asia. Reprocessing plants are relatively easy to set up, so this could take place in other countries and then be imported into China for use by their manufacturers, he believes.

In the longer-term, China’s move could catalyse work on the circular economy, keeping resources in use for as long as possible. Ben Dixon, an associate specialising in the circular economy at consultants Systemiq, says that China’s move is forcing countries and companies to find alternatives for their waste at the same time as several other developments globally are increasing the demand for high-quality recycled materials.

Firstly, companies are collaborating on projects across the plastics value chain through the Ellen Macarthur Foundation’s New Plastics Economy, boosting the sector’s ability to quickly scale up improvements. In October, the foundation announced pledges by Mars, M&S, PepsiCo, the Coca-Cola Company, Unilever and Werner and Mertz to increase the recyclability and recycled content of their packaging.

Added to this are improvements in reprocessing technology and approaches to recycling, including better waste sorting, cleaning and de-odorising methods that reduce contamination, and packaging designers using mono-materials rather than multiple layers of different materials, which are hard to recycle. On top of this, the European Commission is leading activity through development of its circular economy package, he says.

“It’s a really interesting time if you add up all the changes together. It’s potentially a watershed moment for the recycling industry,” he says.

Catherine Early is a freelance journalist and the former deputy editor of the environmentalist. 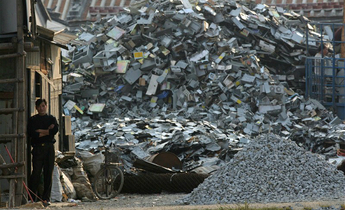 It’s time to move away from an economy that discards things, says Jocelyn Blériot of the Ellen MacArthur Foundation 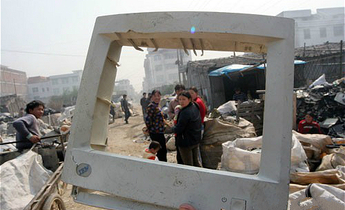 It's uncertain whether imports will be banned outright or recyclers forced to improve standards further, reports Catherine Early 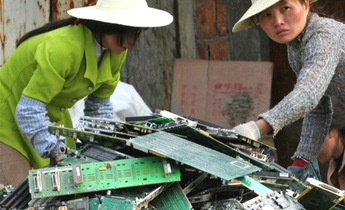 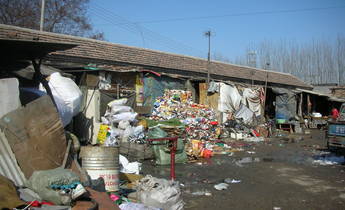 Up to 90% of the world's unwanted electrical and electronic items are being dumped illegally, and China's role in the environmentally harmful trade is likely to grow, says a new report 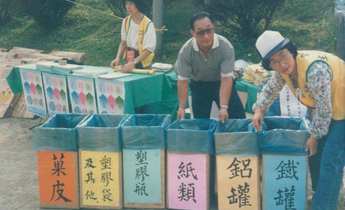 The Taiwanese housewives who sparked a recycling revolution

The inside story of how activists got government to clean up Taipei, by Michelle Winglee