Every year villages are left empty and schools shutdown across the Himalayas in Nepal, as tens of thousands of people throng to higher altitudes in search of caterpillar fungus or Yarsagumba —known as “Himalayan Viagra” because of its supposed aphrodisiac powers. Rising prices and soaring demand in recent years have driven a gold rush in mountainous regions. Yarsagumba fetches at least US$14,000 to US$16,000 per kilogramme at the source and prices increase dramatically for traders further up the supply chain.

From late April until the end of June, just before monsoon descends, communities move from place to place in search of the fungus. “Many villages are left empty as people move upwards bringing supplies and small tents for couple of months. In recent years, the number of people engaged in collection has increased rapidly,” said Rishi Ranabhat, former acting chief of the Makalu Barun National Park in eastern Nepal.

Yarsagumba is found in the grasslands of Nepal, India, Bhutan, and Tibetan plateau of China at an altitude of 3,000 to 5,000 metres. In Tibet it is called Yartsagunbu, which literally means “summer grass -winter worm.” In summer underground caterpillars become infected by a parasitic fungus. The fungus mummifies the caterpillar, the remains of which then pushes up and pops out of the ground in winter.

As the number of people harvesting Yarsagumba grows, tensions have risen and in some cases conflict has led to deaths. In the second week of June, two locals were killed and many injured in a clash with police in Dolpa - a district of Nepal bordering with Tibet. The incident occurred after locals demanded more transparency about the fees for harvesting Yarsagumba charged by the local community managing the Shey Phokshundo National Park.

In another more severe incident in 2009, seven fungus pickers from Kejuwa village in the Gorkha district of western Nepal were beaten to death by villagers from neighbouring Manang district. Since the government legalised the harvesting and trade of caterpillar fungus in 2005, about a dozen people have been killed in conflicts – among themselves or with government authorities.

Government officials are worried as the situation is getting worse. “We can’t say who should have the right to collect Yarsagumba but we have set different permission fees to distinguish between local communities and those from further away. But this hasn’t worked to control the increasing numbers of people,” said Dr Maheshwar Dhakal, ecologist and spokesperson of the department of national parks and wildlife conservation.

Uttam Babu Shrestha, a research fellow at the University of Southern Queensland says, “The major cause of the conflict is the levy (entrance fee) charged by local institutions/villagers to non-native collectors. Local villagers claim customary rights over the Yarsagumba near their villages but non-native collectors refuse to pay it, claiming that the Yarsagumba habitat is common property.”

Government rules stipulate people living in the vicinity of national parks have to pay US$5 for permission to harvest Yarsagumba, people from further away but within the same district pay US$20, and people from other parts of the country pay US$30.  This is just an entrance fee and finding the caterpillar fungus to harvest is not guaranteed. “It’s not easy to search for such small species – between 4-12 cm long and 0.14-0.4 cm wide – in rugged terrain and many people come back empty handed after roaming for months,” said Ranabhat from the Makalu Barun National Park.

There is a long tradition of collecting Yarsagumba in the Himalayas of Nepal and Tibet. However since the ban on harvesting was lifted, disputes between communities have increased. “We thought the resources should be used for the economic benefit of communities as Yarsagumba decays if it is not harvested every year, but its management is becoming tougher due to larger interest in recent years,” added Dhakal.

Dhakal believes the Yarsagumba issue shows the wider challenges of natural resource management in Nepal as the country tries to shift from a centralised to a federal governance system. Nepal established a second constituent assembly a few months after the first failed to pass a constitution that divides power between the central and regions governments.

Dr Shrestha warns that conflicts over the right to natural resources should be taken into serious consideration by those drafting a new constitution, otherwise similar conflicts may erupt over other resources.

Without regulation, overharvesting will lead to the disappearance of Yarsagumba. “The harvesting pressure is so intense that there is no single inch of habitat left untouched by the end of the harvesting season. All specimens encountered are harvested, which impedes its natural regeneration process,” said Shrestha.

His research shows that the annual harvest has declined as local market price has increased by up to 2300% over the last 10 years.  “We should remember that behind the lucrative economic benefit of Yarsagumba, there are substantial ecological costs involved that should not be neglected,” Shrestha added. 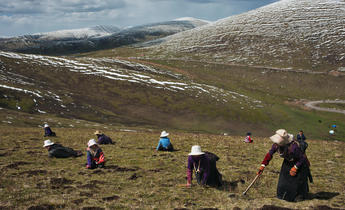 How long can the caterpillar fungus craze last?

Sky-high prices have prompted a rush to collect caterpillar fungus in China, but quality discoveries are becoming rare. An ecological crisis is inevitable. Cui Xuan reports.

China has introduced a number of policies to protect the environment of the grasslands. But studies suggest the ecological and social benefits of such measures have been overstated, writes Emily Yeh.

The double life of Dali Lake

A birdlife sanctuary that’s also a fishery, and whose staff spend their time scaring herons away – welcome to Inner Mongolia's Dali nature reserve.