Urgent changes to environmental laws and much tougher penalties against poachers are needed to save the Siberian tiger in China, conservationists say

Conservationists and commentators in Chinese media worried the tigers might become caught in one of  numerous snare traps set by the hunters, or starve from a lack of wild prey. Worried farmers reported the hungry big cats had attacked chickens, and Chinese television said one had been filmed chewing a dead dog.

Two conservation agencies that work to protect the animals say it is not too late to save China’s tiny population of wild Siberian tigers, if there are urgent changes to animal protection law enforcement and a top level push to ensure local agencies get the message.

After all, Chinese media attention was focussed on the new visitors partly because Putin has made tiger conservation something of a pet project, flying to Siberia to release three of them in May 2014. Putin’s personal interest in the conservation programme is so hands-on that he has micro-chipped tigers with GPS trackers himself.

India’s wild tiger census recently underlined the potential effectiveness of central government action.  In 2014, there were 2,226 tigers, up an impressive 30% from 1,706 in 2011, and a 57% gain from 1,411 in 2006. The Indian government ascribes its success to vigorous enforcement of no-go forest zones for humans.

Conservationists say a similar approach is needed in China, as nature reserves there are still not big enough, and have too many people in them. Fewer than 30 Siberian tigers survive in China, out of a global total of only about 450. Global tiger populations have collapsed by 97% in the last 100 years.

“I see the potential for a very dramatic recovery of tigers in China,” says Dale Miquelle, director of the Wildlife Conservation Society’s Russia Country Program. With a simple formula of “sufficient land, minimal human impact and sufficient prey populations”, he says tiger populations will “recover on their own.”

Siberian tigers, also known as Amur tigers, were once numerous in northeast China, but have suffered from hunting and habitat loss.

Habitat loss is a major problem. To survive and reproduce, tigers need large areas of undisturbed land. A logging ban in Heilongjiang province is likely to help. It was imposed last year, and the government is considering widening it to other areas.

It has set up protected habitats for animals including tigers, by setting up reserves such as Hunchun National Siberian Tiger Nature Reserve. “There’s a core zone where there’s supposed to be no activities, yet cattle are grazed and people enter these lands,” says Miquelle.

“Tigers’ territories are very large. One nature reserve can only hold one or two tigers, so most of the tiger population will live outside the nature reserve,” says Quanhua Shi, a senior manager of the Asia Big Cats program at the World Wildlife Fund.

For tiger numbers to recover, poaching of tigers and their prey needs to be prevented. China has laws prohibiting poaching, but Shi argues the laws are out of date and punishments not strong enough to act as a deterrent.

However, the problem is often less the laws than their enforcement. “The legal framework exists, but enforcement of the laws in the field is often lacking,” says Miquelle.

“Law enforcement people tend not to look at poaching at a serious offence,” he says. “Local people are trying to make a living one way or another, so that’s understandable, but that leniency leads to an acceptance of poaching as normal.”  Tiger parts are sold for Chinese medicine, and a whole animal can fetch as much as US$10,000.

Inspectors often lack the power to enforce the law. At Hunchun, they “don’t have the legal right to arrest or hold people, so if an inspector has caught somebody who has set snares, he has to go and find another official,” says Miquelle.

Lack of resources and corruption are further problems. Shi says there are too few law enforcement officials, they tend to be poorly educated, and those tasked with anti-poaching patrols are locals, who tend to go easy on their own community.

As a result, poaching continues. “In Jilin province, hunting of any kind of wildlife is forbidden but there are still lots of traps in the forest,” says Shi.

To improve things, Miquelle says the central government must take more action. “It’s not that there’s lack of commitment, but perhaps insufficient awareness of the magnitude of the problem, and the need for engagement,” he says. “What we’d like to see is that the highest levels of government get engaged in tiger conservation, so that it’s not left to the provinces.”

Since the 2010 Tiger Summit, attended by then-premier Wen Jiabao, the government has been looking at the issue. He promised the government would pay attention but Shi thinks the message is not filtering down to local officials.

But China can still reverse the fate of its Siberian tiger population. “If we could go from the current situation to one where there might be 70 or 80 tigers, that would be a magnificent success story,” says Miquelle.

Nicholas Olczak is a freelance journalist based in Beijing.

A deal to build a 2,600-kilometre pipeline through the Altai Mountains, home to rare species like the snow leopard, could be finalised within a month. 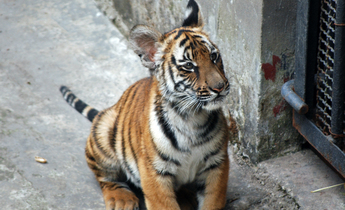 Although a number of rewilded tigers are ready to be sent back to China from South Africa, financial and logistical problems are blocking their return