Being at peace with the world starts with food, argues a Chinese Buddhist nun in her new book advocating vegetarianism

This new book advocating vegetarianism by a romantic-novelist-turned-Buddhist nun is more of a manifesto than a cook book. Peilian Jingle laces her arguments for vegetarianism with concepts loosely derived from Chinese medicine, Daoism and Buddhism to present a psychological critique of modern China’s frenzied consumerism.

But Peilian criticises people who go vegetarian purely for health reasons as not true vegetarians – seemingly changing the definition of the very word. For her, greed is a metaphor: “Food just fills our stomach; it cannot remedy our emptiness, our boredom, or our anxiety.” A correct attitude to food is therefore a correct attitude to life, and vegetarianism a simple, gentle way of creating peace and serenity.
It is Peilian’s first book since becoming a Buddhist nun, and represents a departure from her previous novels on marriage and domesticity. At age 31, she lost her husband, then aged 37, to a sudden illness. Bereavement left her distraught, searching for a change from a life of confusion and distraction. Bereft and angry, she befriended a vegetarian who set her on a path to finding peace with herself and with the world – and it all started with food.
Appetite and cravings
Hotpot or barbecue? Noodles or rice? When you have dozens of choices, you’re not just eating to fill your belly and fight off hunger – you’re looking for certain flavours, to fulfill certain cravings, she says. Her philosophy of simple food is based on the Buddhist notion of detachment, arguing there is no difference between appetite and craving – and craving is a trap.

This is the basis for her critique of the food industry, explaining how manufacturers are constantly trying to create new flavours, bright packaging, artificial foodstuffs and polluting production processes to stimulate our cravings, burning through resources and damaging our health in the process.
Cravings mean consumers are eating “lots of rubbish along with the food, making us feel unwell and ill at ease, she says.

“If we are not slaves to those appetites we will no longer be hoodwinked, we will no longer feel a need to eat all those trashy foods. True vegetarians eat just as much as they need, no more, no less. The world’s resources belong to no single person, and we have no right to waste them.”

Her argument combines Buddhist beliefs on peacefulness and nonviolence with Daoist-based ideas about the energetic properties of foods borrowed from traditional Chinese medicine, and these ideas provide the book’s title, “You are what you eat”.

She classifies three types of food by their energetic properties and three types of people – happy and nonviolent people, the apathetic and violent, and the neutral, who are neither violent nor nonviolent.

Turning to food’s energetic properties, Peilian contrasts peace-promoting, happy-making, nonviolent food such as grains, beans, fruit nuts, and vegetables to “violent foods”, a category that includes all meats, eggs and pickled or salted goods, fizzy and alcoholic drinks with chemical additives, and processed foods. Happily, chocolate, coffee and strong tea are neutral foods, with no negative effects when taken in moderation.

Those who are vegetarians for long periods of time commonly become more peaceful and are less prone to extremes,” she suggests.

By contrast, fighting over resources is seen as typical carnivore behaviour, whereas a true vegetarian will be too peaceful to fight with anyone over anything because they cannot treat any form of life as an enemy. Rejecting meat is therefore a socially responsible choice, she concludes. What’s more, meat-eaters struggle to be at peace because they are taking in too many predatory energies.

Like many New Age thinkers, Peilian tips some science into the pot to season what is essentially an ethical argument. She quotes biologist John Fernstrom’s research from Massachusetts Institute of Technology to suggest that high serotonin levels in fruit and vegetables reduce aggression.

Drawing on Buddhist tantric imagery, she describes meat as a source of terror, as if it is a corpse cooking in the pot. The descriptions are sometimes nauseating, and some views extreme, but overall prompt readers to think and adjust their lifestyles.

I was eating as I read this book, and as I picked up a piece of chicken in my chopsticks, I heard a voice: “Why are you eating me? Your stomach’s a graveyard!”

You are what you read!

Why I've become a vegetarian: Chinese filmmaker speaks out about environmental impact of eating meat

Jian Yi, director of 'What's For Dinner?', says he was shocked into becoming a vegetarian by the environmental and animal welfare costs of meat production 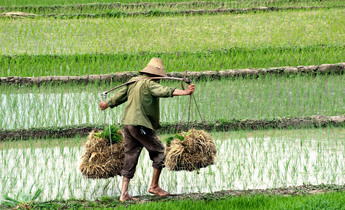 China’s government pushes potatoes as an alternative staple at mealtimes in a bid to cut pollution, curb water use and reduce reliance on costly food imports

China's pollution crisis means the world's most populous country will be increasingly reliant on food imports, and the consequences will be global, says new study